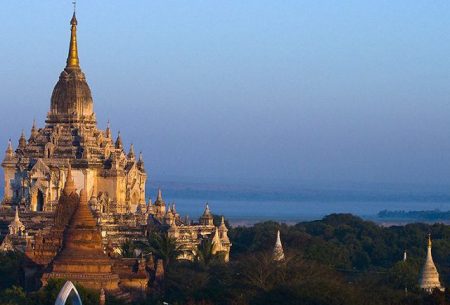 History of this perfectly dimensioned temple structure built in 1105 is credited to King Kyansittha. It denotes “the stylistic end of the Early Bagan period and the beginning of the Middle period”. Ananda temple is a perfectly dimensioned stylistic structure, a fusion of Mon and Indian architectural styles and is the central monument built in the Pagan valley. Pick up and transfer to the starting point near Ananda Temple around 08:00 AM. Start biking to Ananda Temple . Your first stop is at Dhammayangyi , a massive temple dating from 1170 which is visible for kilometres around. Largest of all the temples in Bagan, the Dhammayan as it is popularly known was built during the reign of King Narathu .This imposing structure is famous for its interlocking no mortar brickwork. Continue to Dhammayazaka (2 km) where you may choose to ascend the temple for a panoramic view. Re-join a paved road, turn left and if you wish, pause for refreshment at a local restaurant . Stop at Phwa Saw, a quintessentially Myanmar village of rattan houses, busy with bullock carts, zebu cattle and local craft industries. Proceed to Minnanthu monastic complex and village . Here your ride offers uninterrupted views (no pylons) of Bagan’s awesome monuments, toddy palm trees and wandering goats. Arrive at Sulamani (2 km) temples is one of the most-frequently visited in Bagan. This tour ends at  near Ananda Temple.Enjoy your day.

Questions, issues or concerns? I'd love to help you!